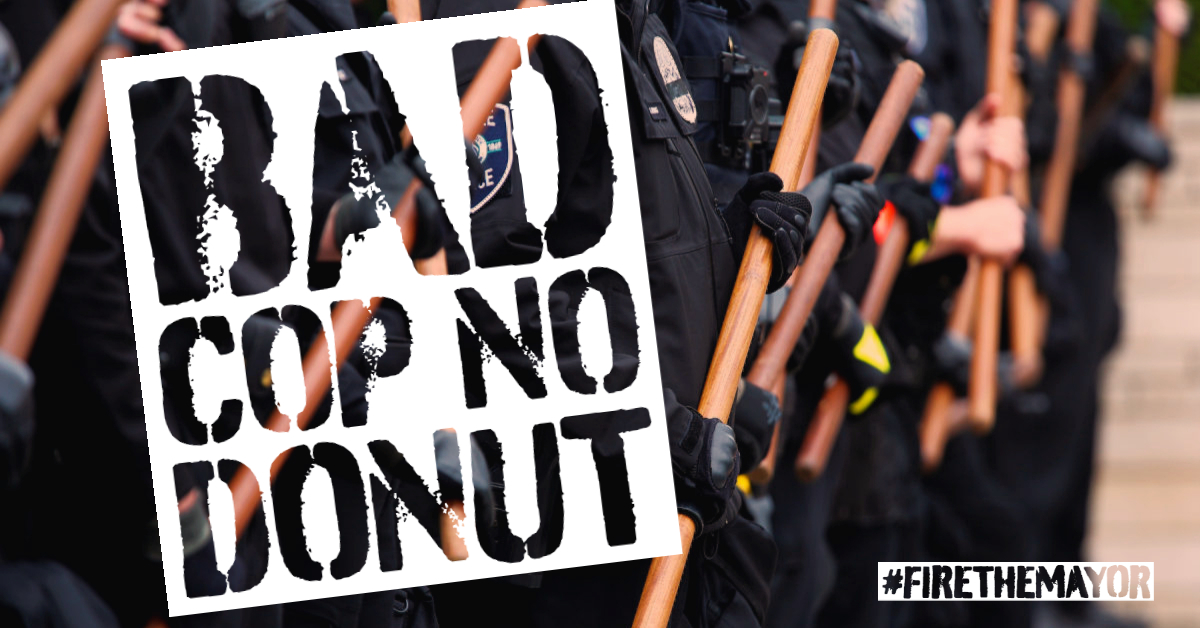 It’s no longer a question whether or not the Seattle Police Department is careening out of control — it’s a foregone conclusion. This problem has been broadcast all across social media platforms on almost every computer, tablet, TV, and mobile device in the world.

With an already-extensive history of excessive force, unwarranted violence, poisonous police conduct, and ZERO accountability, the SPD has slowly grown from our once-tolerable family pet to some rabid, unrecognizable, power-starved beast that, sadly, needs to finally be corralled, quarantined, and put down.

Their behavior isn’t that of a morally-sound, highly-trained law enforcement agent — but that of a 12-year-old playground bully jacked up on Monster and Sour Patch Kids, dressed in riot gear, and armed with a machine gun.

This devastating truth is whispered amongst one another in private, shouted furiously at protests, and scribbled onto countless cardboard signs; angrily scrawled in graffiti on any naked brick wall in the city.

After abruptly deserting their post at the East Precinct — after deliberately abandoning the community they’re sworn to protect — it’s been painfully hypocritical to see the SPD return to Capitol Hill with a renewed sense of undeserved moral authority.

Over the past few years, the SPD’s actions have grown from perverse and desperate to revoltingly cruel and sadistic.

While the department refuses to acknowledge any wrongdoings — unable to substantially punish the swath of deeply-disturbed officers they keep on their payroll — the SPD remains brutally unconstitutional with their putrid brand of policing.

Maintaining this corrosive, abusive relationship with our Police Department undermines the necessity of retaining a law enforcement agency at all, since those entrusted to enforce the law habitually refuse to abide by it.

An unprecedented number of people across Seattle have come together in support of the Black Lives Matter movement with calls to defund the over-bloated police budget by 50%.

Rather than support these movements or earnestly push to meet local Black leadership’s reasonable demands, Mayor Durkan has instead acted to suppress lawful protest activity, endanger the safety of people throughout the city, and allow for continued police brutality and overreach.

And these are only the latest — the recently outrageous –transgressions in storied history of habitually neglecting our city in favor of her wealthy donors and neighbors.

We’ve created this space to document and share the experiences of those who have seen these abuses first hand.

“[T]here was a protest and once the flash bangs and tear gas went off, it seeped into my apartment. And my three-month-old son who was sleeping was awoken from his sleep, coughing, crying, spitting up mucus… mucus bubbling out of his nose, he was bright red. And we were forced to leave through our homes. We ran to our car. We didn’t have time to even put him in the car seat because it was so bad. My wife had to pour breast milk on his eyes and we had to go and leave our home.”

“I was the recipient of pepper spray myself and experienced burning in my eyes, nose and throat which made it very difficult for me to run in the opposite direction, which seemed to be the instruction. We never got answers as to why we weren’t allowed to march. I found out by a police officer yelling in my face at 5:05 that there was a curfew just handed down by the mayor for 5pm.” – May 30, 2020

“The onslaught of explosions was relentless, it seemed like they should stop right away, but they didn’t… I went to my door to see if anyone needed refuge from the smoke, people were still there watching the police deploy these explosive weapons. A live band was playing while in the midst of clouds of smoke and gas. The sounds of the music punctuated by detonations was devastating.”

“I am afraid to leave my apartment, because a neighbor was threatened with arrest on camera for trying to get to their own apartment without their current address on their ID. Although I have updated with DOL, I do not yet have a physical card with my new address on it. I have breathing issues and have had to seal my windows since Durkan and Best keep indiscriminately gassing the entire neighborhood.”

“I got pepper sprayed directly in the eyeballs around my umbrella by a police officer from less than three feet away. It was purposeful. I [did] nothing to provoke this other than stand with an umbrella for over an hour that day. I was blinded for at least 30 minutes, had to use a stranger’s inhaler and rinse out my eyes approximately 20 times. Fellow protestors helped me run across 10 city blocks away from the tear gas and another lady sat and did breathing exercises with me because of my acute anxiety. I had a massive panic attack while blinded. I developed a severe cough for approximately one week and there was one night I weezed so badly I thought I may have to go to the ER but I have no insurance and have been out of work with no unemployment since the middle of March.”

“The past few weeks I have been going to work as scheduled. The only time I have felt unsafe was when there has been police presence. My coworker arrived and we both decided it would be best to stay closed for the day. This is also the only time business was affected for us. She gets ubers to and from work and was scared that once the cops started closing in, we’d be trapped. We were also scared about the use of pepper spray and tear gas in the area given the history of these encounters with the SPD.”

Skip back to main navigation