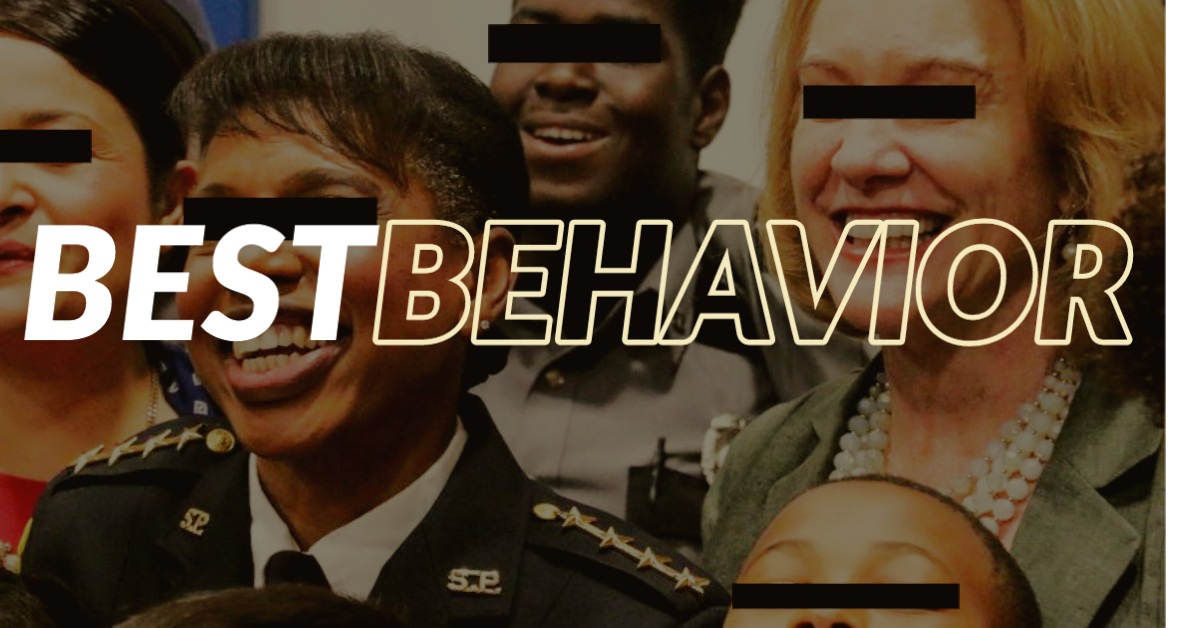 After reading Chief Best’s shockingly smug letter to City Council in response to @DecrimSeattle and @KCEquityNow‘s #DefundSPD movement, we couldn’t sit idly by and let her normalize her lies any longer.

We appreciate the sacrifices Chief Best has made as a Black female officer of the law, but with those three distinctions come an undeniable duty to maintain standards of integrity, uphold moral virtue, and display an impervious insistence for police accountability.

The following message is a mirrored response to Chief Best’s open letter and is intended to be read side-by-side so you can decide for yourself if Carmen Best really has her community’s best interest at heart.

Re: Re: Decriminalize Seattle/King County Equity Now Proposals // I’ma Let You Finish, But…

In the spirit of working collaboratively toward a new vision of community safety in this city, we wanted to take this opportunity to tell you what a horrible fucking job you’re doing.

As you know, seven City Councilmembers committed to cutting 50% of the SPD’s budget, which you said would “require a simply irresponsible number of layoffs”.

You mean layoffs like the ones the rest of our city continues to suffer through during the pandemic?

And even though Black workers already make up around 11% of recent layoffs, you threatened your own Black officers with the possibilities of looming unemployment.

We know you’ve stated, “clearly and repeatedly”, that the Department stands “ready to engage in a community-lead re-envisioning of community safety”.

But your failures — and the failures of your officers — drastically prove otherwise, and are as predictably redundant as the defensive sentence structuring in your letter.

You claim SPD has a “robust history of seeking community guidance,” yet you’re unwilling to trust the community to guide or lead you anywhere.

You say the Department will “never shy away from authentic engagement with its diverse communities,” except that’s exactly what you’re doing right now — spoiling any remaining hope of authentic engagement between the public and the police for far beyond the foreseeable future.

We really don’t think you fully understand, nor support, any significant investment of funds into community-based safety resources — unless, of course, you, your Union, or the Mayor benefit per$onally from it.

We, too, have grave concerns over your assertion of a “false dichotomy” between “funding police services and investing in the community” — but for very different reasons.

Your inability to discern between unconstitutional policing and much-needed community health funding further demonstrates your Department’s delusions — as if the brutality your officers deliver to citizens will really help solve any one of our city’s social crises; let alone the four civil emergencies our Mayor has triumphantly marched us into.

You claim that the Council is “omitting from its analysis (the) decades of experience” in the SPD Command Staff — yet that boast of leadership is dramatically nonexistent when it comes to the fervent brutality, severe lack of accountability, and the absence of swift, unwavering punishments within your precincts.

The SPD has NOT demonstrated its ability to change how it operates over the past 10 years — in fact, it can be argued that things have gotten worse.

There’s been no genuine attempts at transparency; nor to engage with the “nation’s experts” on policing; nor to even feign interest in the community’s proposals.

The fact that you would even try to spread such blatant misinformation is reprehensible, disingenuous, and incredibly offensive to the victims and families of those who have either been murdered, misgendered, brutalized, harassed, abused or manipulated by your officers, during your tenure.

It’s also important to acknowledge that your resistance to many of these recommendations is undoubtedly directly linked to your societal connections — or to your bank account — as well as to the special interests of the Mayor, the Union Boss, and whoever else profits off of the $403 million budget.

The requirements of the federal Consent Decree – manufactured by Mayor Durkan with bombmaker-like precision — is not an excuse for enabling police violence and misconduct; nor is it a Mood Ring that shifts meanings or mysticisms to reflect the attitude of whoever has possession.

It’s concerning that you’re now actively taunting us with your expectations of police reform — throwing our determination for change back into our faces.

Perhaps you derive a twisted sense of satisfaction in protecting your officers more than the city’s taxpayers — whom you work for, lest you forget.

Oh, and you’re right — the court does still retain jurisdiction over the consent decree — a defense both you and Mayor Durkan wildly wield like a fresh can of teargas on a summer night.

And despite the legislative, fiscal, or fiduciary limitations, the people of Seattle will rely on the Federal Court to uphold the foundational principles of Constitutional policing, or to re-evaluate the outdated consent decree given this year’s extraneous circumstances.

This letter will be followed by a much more detailed analysis of how Mayor Durkan choreographed an attempt to terminate you as Police Chief, and — due to the resulting confusion — why your officers decided to abandon the East Precinct.

We too wanted to make sure we’re on record for bringing these issues to the public’s awareness as well.

Despite your resistance for reform or lack of responsibility for your officers — from the excessive force to the manic brutality; from the precinct desertion to the countless policy violations, to the rumors of cruel & unusual punishments — the Department’s conduct continues to be obscured by darkness, warranting one last desperate plea from the community for increased transparency.

It’s a clear indication of the SPD’s incapacity of doing the work it’s paid to do — and paid quite handsomely — hence, the ongoing reform efforts, which you describe as: “wide-ranging recommendations”.

As you said, “the federal settlement agreement is available online for all to read” — but it’s highly-politicized and worded in a way to be both oddly specific yet intentionally ambiguous simultaneously.

“The SPD policy manual is available online for all to read” — but your officers refuse to adhere to their own policies — not to mention adherence to the “rule of law” they’re so adamant about enforcing and protecting.

And you’re right again! SPD data is available online – but it’s often unresponsive and inaccurate, or presented in a cluttered, 90s Geocities-sort of way, with vague terminology “determined by the FBI” displayed through indecipherably unhelpful data maps.

But of course it’s accessible for all to review and use and scrutinize — we’ve studied the numbers which is why we want to defund the police!

In addition to juked crime statistics, you know what else is on the Seattle government’s website?

And within a few seconds we can learn that you’re making waaay too much money as a public servant ($140.87/per hour) to be so uninformed on the complexities of these issues.

You mentioned that “as a department, we believe in science”.

Now, is that a humblebrag on behalf of the SPD’s collective sixth-grade education, or is that yet again another futile attempt to convince the tech-savvy people of Seattle that the police actually give a shit about: 1.) organizing knowledge, 2.) testing or exploring explanations, and 3.) making intelligent, reasonable predictions about the universal world of policing?

Yeah… We didn’t think so either.

We’re confident you can find a “plethora of evidence” that “effective, evidence-based policing prevents crime”…

Now if only your Department knew what that meant.

Furthermore, by mentioning the “countless, peer-reviewed articles” without naming any (we linked two for you) really makes us question whether or not you actually believe in science; or if it’s — once again — all talk and inactivity; or, if you’re even determined to give back to the Black community at all.

Instead, you’d rather command an army of seemingly angry 12-year-old bullies, doped up on unchecked authority and Mango Loco Monster, armed with “good faith” and assault rifles, and practicing ineffective, emotionally-reactive-based policing — which you and the Mayor both seem to silently encourage.

As a few journalists put it: How can police solve a problem they’re a part of?

Now, we know that you “do not know what the advocates were pointing to” when they referenced evidence that policing doesn’t necessarily prevent crime.

You don’t know a lot of things.

But since you and your Department “believe in science”, why not try educating yourself on the wide array of opposing opinions and perspectives to develop a better understanding of the situation?

Altogether we are increasingly concerned by the apparent detachment you and your Department have from reality.

As you said, “If we are to do the hard work ahead of us, we cannot argue about facts.”

However, this is precisely what you and your officers do each and every time they’re faced with the realities of their intentions to murder, teargas, Taser, humiliate or intimidate vulnerable members of our community.

You also mentioned that “If we are going to successfully meet the needs of our entire community, we must, together, create a plan, grounded in theory, guided by evidence, and governed by equity” — which is exactly what our Black-led organizations and coalitions are currently doing.

You go on to say, “With a plan in place” — (again: the plan is in place, remember? That’s why you wrote your letter!) — “as a City, (we can) determine how to best fund and implement that plan.”

Again — holy shit — where have you been for the past, like, forty days?

Are you being willfully ignorant, or are you truly this densely stubborn? Or stubbornly dense?

You are correct to say that “this will not happen overnight” — like the time your officers abandoned the East Precinct.

Didn’t that “happen overnight”? How was that decision made so quickly?

Let’s use our imaginations. Pretend the Mayor’s going to try to fire you — again. Go rally your troops, pack up your shit, and order them to support cutting their budget in half; call it a goodwill gesture to the community whom they’ve sworn to protect and serve — not seek and destroy.

Or do you not have that kind of authority over your own police department and officers?

Now, it’s true, we will have to “bridge the gap” between the atrocities of today and the visions of tomorrow — only those premonitions won’t include you or your prepubescent Goon Squad anymore.

You’ve droned on throughout “the current turmoil” that the Seattle Police Department stands “ready to engage (in) the important conversations” and “work(s) to produce real, lasting change in community safety”.

Why would you continue to say shit like that when it can be so easily disproven?

You mention that change must be “met with a plan” — but when you’re greeted with one, you only want to discuss the potential failures, not the practical solutions.

What you’re really asking for is a plan that solely benefits you, your Department, and the Mayor.

Now don’t worry — we’ll be following this letter with another that lays out the specific legal, practical, moral, and ethical dilemmas we see within your Department and inside City Hall.

We hope these forthcoming details will clarify the inherent risks of continually undermining our community’s demands without providing any semblance of a legitimate defense, or an alternative solution that isn’t self-serving or severely insulting.

Moving forward, try earning your inflated hourly wage by working for the people, not against them.

Because that’s the only way our city survives.

And just like science, maybe one day you and your Department will learn how to believe in that too.

The Committee to Recall Jenny Durkan