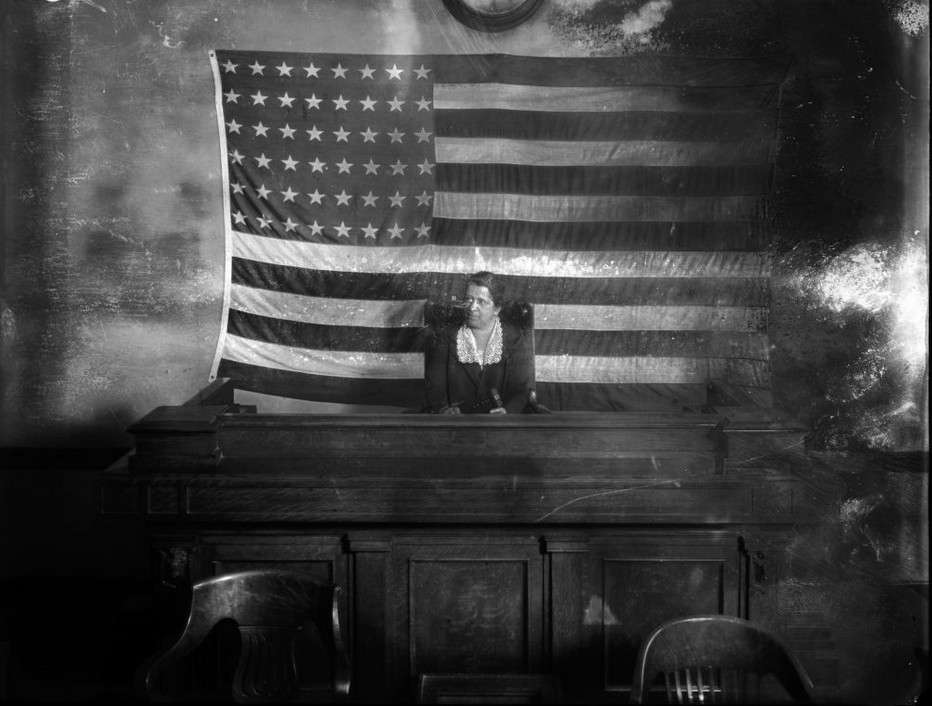 Bertha Ethel Knight Landes was the first female mayor of a major American city, serving as mayor of Seattle from 1926 to 1928.

After years of civic activism, primarily with women’s organizations, she was elected to the Seattle City Council in 1922 and became council president in 1924.

In Seattle, Landes was active in women’s organizations, including the Women’s University Club, the Rainier Club, and the Women’s Auxiliary of University Congregational Church.

She was president of the Washington State chapter of the League of Women Voters.

From 1920-22 Bertha served as president of the Seattle Federation of Women’s Clubs, which by 1923 included 245 member clubs representing thousands of women.

With the Federation, in 1921 she orchestrated a week-long Women’s Educational Exhibit for Washington Manufacturers.

Staffed by more than 1,000 club-women and showcasing the technological innovations of 130 manufacturers, it bolstered the spirits of the business community during a period of severe recession, symbolizing for the state’s business community the emergence of Seattle as a sophisticated, modern metropolis.

One such manufacturer wrote to Landes after the exhibit expressing hope “that someday you will be rewarded by seeing greater prosperity in Seattle, and that you will then feel fully repaid for the untiring efforts you have put forth.”

That year, Landes was appointed by the city mayor to serve on a commission studying unemployment, the only woman on the five-member commission.

The purpose of the club was to educate women about local, state, national and world politics, and in cooperation with other organizations, to work towards securing the welfare of the city and improving civic conditions.

Within a year it had more than 500 members.

Landes and Kathryn Miracle were the first women to serve on the Seattle City Council; both were elected in 1922.

Landes became council president after her reelection in 1924. She became acting mayor in 1924 when Mayor Edwin J. “Doc” Brown left town in June to attend the 1924 Democratic National Convention

Angry at what she saw as police corruption and lawless activity, Landes fired Police Chief William B. Severyns.

She began her own law and order campaign, closing down illegal activities throughout the city, including lotteries, punchboards and speakeasies.

Upon his return, Brown reinstated the police chief.

When Brown ran for another two-year term in 1926, Landes ran against him, on the platform that “municipal housecleaning” was needed in the Seattle government.

Landes easily won the election in March, by more than 6,000 votes.

During her term, she advocated municipal ownership of utilities such as Seattle City Light and street railways. She also fought hard against bootleggers and reckless drivers, and strictly enforced regulations for dance halls and cabarets.

The Civic Auditorium, later renovated as the Seattle Opera House, is one of her accomplishments.

She appointed qualified professionals to head city departments, improve public transportation and parks, and put the city’s finances in order.

Landes ran for a second term in 1928. Although endorsed by newspapers, the Central Labor Council, the Prohibition Party, and women’s organizations, Landes was easily defeated by Frank Edwards, a political unknown, by a vote of 59,000 to 40,000, in a record turnout.

Landes became the first woman to serve as Moderator of Washington’s Conference of Congregational and Christian Churches and was also elected national president of the Soroptimists, a professional women’s organization.

She wrote many articles for national publications, often urging women to enter politics, their “natural sphere.”

During the 1930s, Landes was chair of the Sewing Room Work for the Women’s Division of the Mayor’s Commission for Improved Employment.

She oversaw 673 women who sewed garments for women and children to “help improve the unemployment situation.”

From 1933 to 1941, Landes traveled extensively. In 1933 she and her husband began to lead student groups, sponsored by the University of Washington, to the Far East.

The couple also took groups of schoolteachers from across the United States to sites in Alaska, Yellowstone and Glacier national park, among others.

Henry contracted bronchitis on a trip to China in June 1936, which developed into pneumonia, leading to his death in Seattle on August 23, 1936 at the age of 68.

At the time of Henry’s loss, Bertha wrote that he was “pleased and willing to have me try my wings” and that he was her “tower of strength in times of stress, and made many sacrifices without complaint that I might give my time and strength to my civic service.” She added, “Life was to be lived to the fullest, always on a partnership basis and a definite sharing of different special interests.

It was so lived for 40 years until the summons came for one of us, and now I have to face life and its problems alone.”

Following his death, Bertha agreed to lead the tour alone in 1937. She continued her travels in 1938 aboard the ship SS Monterey, with stops in Honolulu, Pago Pago, Auckland, Sydney, and Melbourne.

During the late 1930s, Bertha began to reduce her level of civic activism. She gave fewer public speeches, focusing instead on smaller appearances and on lending endorsements and assistance to community causes such as Seattle’s Women’s City Club Chorus, as well as fundraising for groups like the League of Women Voters. Her health began to decline.

In her private life she turned away from the traditional religious practices of the Congregational Church, of which she and Henry had been members since the late 1890s, joining instead the Unity School of Christianity.

Bertha continued to live independently at the Wilsonian Hotel in Seattle’s University District until 1941, when she moved to Pacific Palisades, California, in hopes that the warmer climate would improve her health.

Her ashes were interred at Evergreen Washelli Memorial Park in Seattle.

Today, the largest meeting room at Seattle City Hall is named in her honor.

The tunnel machine used to construct the Alaskan Way Viaduct replacement tunnel under downtown Seattle was nicknamed “Bertha” after her.