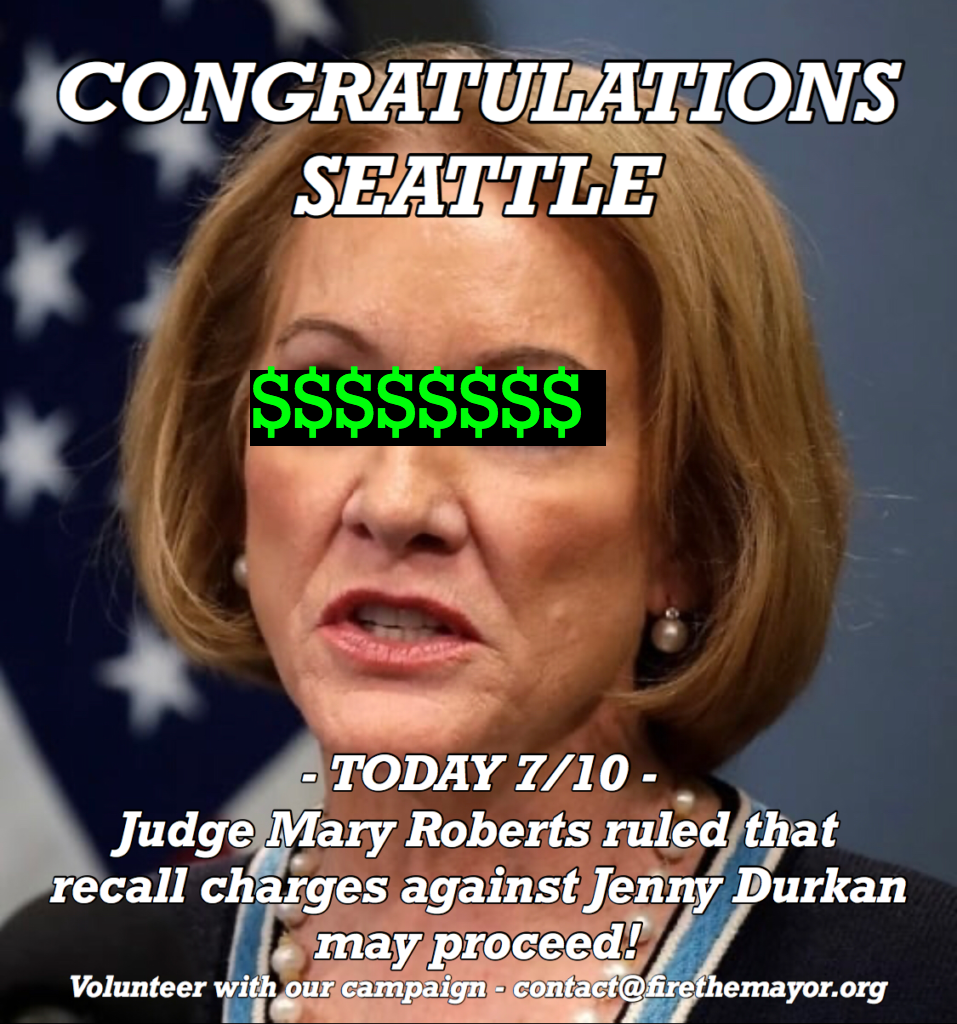 A King County Superior Court judge approved a petition Friday for an election to recall Seattle Mayor Jenny Durkan, opening the door for a campaign that’s gained steam over the last several weeks.

The ruling on charges filed by a group of five people last month comes after weeks of local protests against racism and police brutality — sparked by the killing of George Floyd, who died after a Minneapolis police officer pressed a knee to his neck for about eight minutes.

Once any recall petition is approved, signatures are needed to qualify for a special election ballot. The petitioners must within 180 days collect valid signatures from a number of voters equal to 25% of the votes cast in the last election. In this case, more than 50,000 signatures from Seattle voters would be needed.

The Durkan petitioners’ recall effort, known online as the “Fire the Mayor” campaign, accuses the mayor of “endanger(ing) the peace and safety of the community” by allowing police to “leak false information about fabricated crimes and threats to the media” and issuing a city-wide curfew without sufficient notice to the public. The petitioners also accused Durkan of restricting certain property rights in downtown Seattle and Capitol Hill, the neighborhood where many of the protests took place.

“Jenny Durkan’s abuses of power, lack of foresight and failure to protect the public — and the peace — in Seattle leaves us with no choice,” petitioner Elliott Harvey wrote in a statement on the campaign’s website. “This is exactly the kind of case a recall is intended to address.”

In a response Saturday, Durkan’s chief of staff, Stephanie Formas, said the mayor “consistently has acted to protect the City’s public health and safety and to respect the constitutional rights to peaceful protesters,” and defended Police Chief Carmen Best, who Durkan believes “has exercised her challenging duties lawfully and appropriately to protect the public peace,” according to the statement. Advertising

The court held an online hearing on the petition last week, hearing from the petitioners and from attorney Rebecca J. Roe, who represented Durkan.

In her ruling Friday, Judge Mary E. Roberts dismissed six of the seven charges put forward as “insufficient,” but allowed one — which accuses Durkan of allowing tear gas and other crowd control weapons to be used during the coronavirus pandemic — to proceed “more narrowly than alleged.”

The judge did not rule on whether the allegation was true. “This court’s role in this case is limited,” she wrote. “At this stage of a recall effort, the court is to assume that the Recall Petitioners’ allegations are true, and to determine whether if true, they can support a recall.”

Formas, speaking for Durkan, said in a statement that the court’s ruling is significant since, at this stage of the proceedings, the judge must assume the allegations are true. “Even under this low standard, the Court dismissed six of the seven claims” in the petition, and dismissed a second petition altogether, the statement said.

“The mayor believes this remaining claim will be dismissed,” Formas said.

Roberts also approved a ballot synopsis, which reads: “As alleged by (the petitioners), shall Jenny Durkan be recalled from office for misfeasance, malfeasance, and violation of the oath of office, based on the following charge: Mayor Durkan endangered the peace and safety of the community and violated her duties under state and local laws and her oath to uphold the federal and state constitutions when she failed to institute new policies and safety measures for the Seattle Police Department after learning of the use of chemical agents on peaceful protesters as a means of crowd control during a public health emergency.” Advertising

A court clerk is now expected to certify and submit the synopsis to Durkan, each petitioner and the county auditor, according to the ruling.

The city of Seattle is also facing a class-action lawsuit filed by a group of Capitol Hill residents and businesses last month for the “extensive harm” they’ve faced as a result of CHOP, or the Capitol Hill Organized Protest.